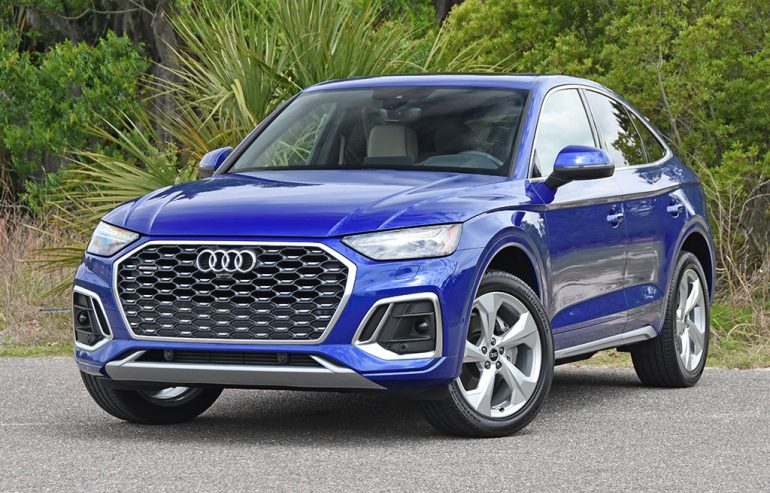 The commonality among crossover utility vehicles (CUVs) has forced many automakers to do something different to set their bread-and-butter vehicles apart from the rest of the crowd. Audi has joined the likings of automakers to add unique styling to the latest Q5 CUV giving us the new Q5 Sportback, another take on a coupe-like styling for a crossover.

The new Audi Q5 Sportback made its introduction last year as a 2021 model year taking all that we’ve grown to like in the normal Q5 crossover and restyling the rear elements for a coupe-looking design. The design may cut into precious cargo space but elevates the Q5’s presence out on the road to be more of a head-turner instead of allowing the Q5 to fade into the background of other mundane crossovers in its segment.

Taking the current Audi Q5 and re-sculpting the rear half is mostly what you get in the new Q5 Sportback, which isn’t a bad thing considering the Q5 has a lovely drivetrain and provides good accommodations with some luxury appointments inside. The Q5 Sportback is powered by the same engine in the Q5 45, a 2.0-liter turbocharged 4-cylinder with 261 horsepower and 273 lb-ft of torque. The engine is bolstered by a 48-volt mild-hybrid system, and all mated to a 7-speed dual-clutch automatic transmission with quattro all-wheel-drive. This is the only powertrain for the Q5 Sportback while the normal Q5 may be equipped with a less-powerful base engine with 201 horsepower (Q5 40 TFSI), or a more powerful 2.0-liter turbo in the SQ5 variant with 362 horsepower. Best of all with the design of the new Audi Q5 and Q5 Sportback, is that it is a rear-wheel-drive bias setup with a longitudinal engine mounting, mostly for better emissions control. Still, I like what Audi has done!

The power comes on strong almost immediately if you stomp on the throttle or have the transmission or drive mode in Dynamic/Sport. Zero to 60 mph time is about 5.5 seconds from a stop. Overall, power is smooth and so is the ride quality for the most part. Though, going over road rises and undulations the suspension with its fixed-rate dampers gets somewhat busy with some unwanted motions. The optional 20-inch wheels on my test vehicle wrapped with beefy Continental all-season tires and a large sidewall do well to absorb some road imperfections. 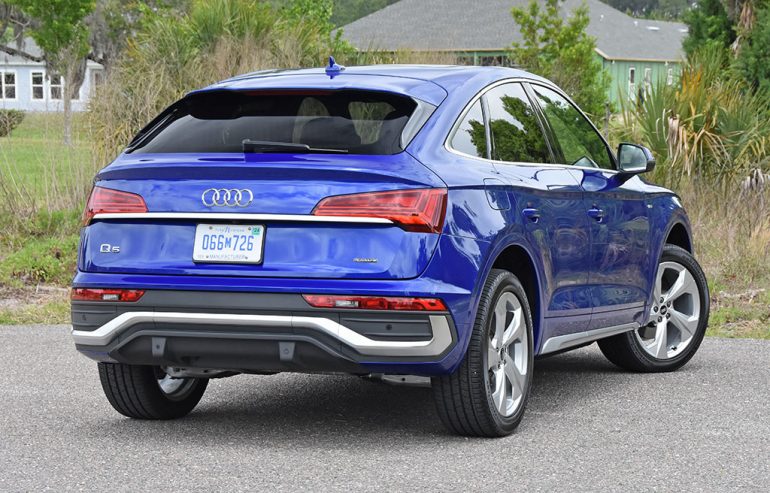 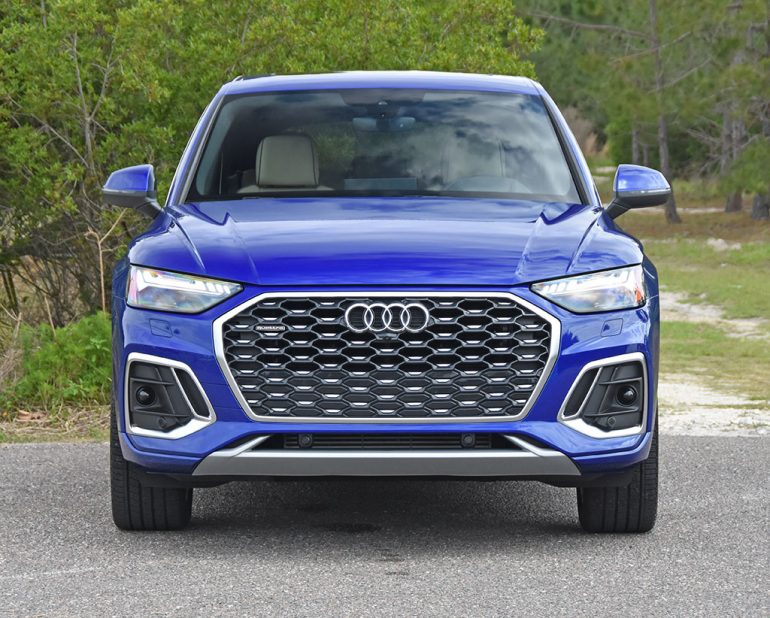 The fuel consumption is mostly consistent, and you’ll easily match the EPA estimates in the real world of 23 mpg city, 28 mpg highway, and 25 mpg combined. With the mild-hybrid system and dual-clutch automatic transmission having a direct connection to the engine the Q5 Sportback is easy to get the EPA numbers and sometimes beat them on the highway with my best of 29.3 mpg driving at a steady 70 mph for about 10 miles. 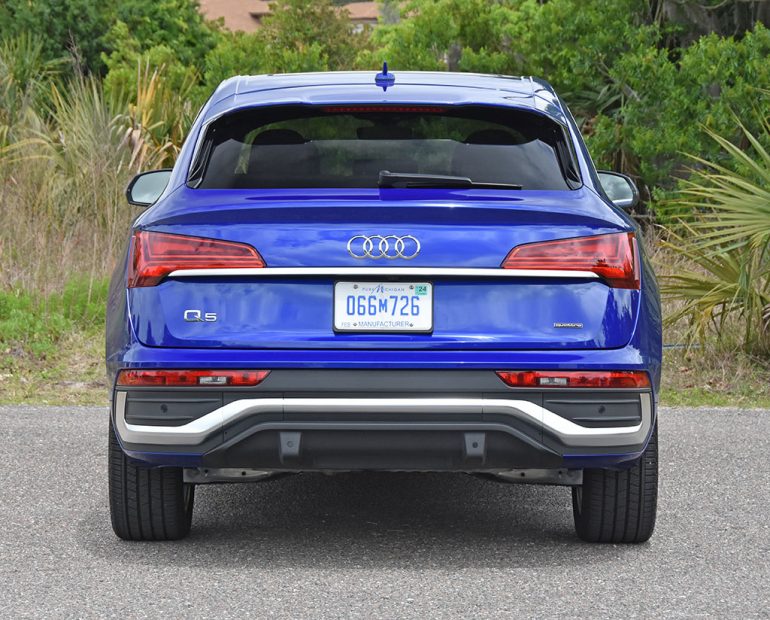 The interior of the Audi Q5 Sportback is identical to what you find in the other normal Q5 trims. There’s a nice level of good fit and finish throughout with plentiful soft-touch surfaces on the dashboard. The 10.1-inch infotainment touchscreen is easy to reach and has a short learning curve even if some of the controls seem to be a bit difficult to navigate through for simple tasks like changing the radio station or accessing your favorite presets. The system could use a physical controller for such functions instead of relying on accessing additional menus to pull up touchscreen buttons. There’s also the integration of Apple CarPlay and Android Auto through either USB or wireless. 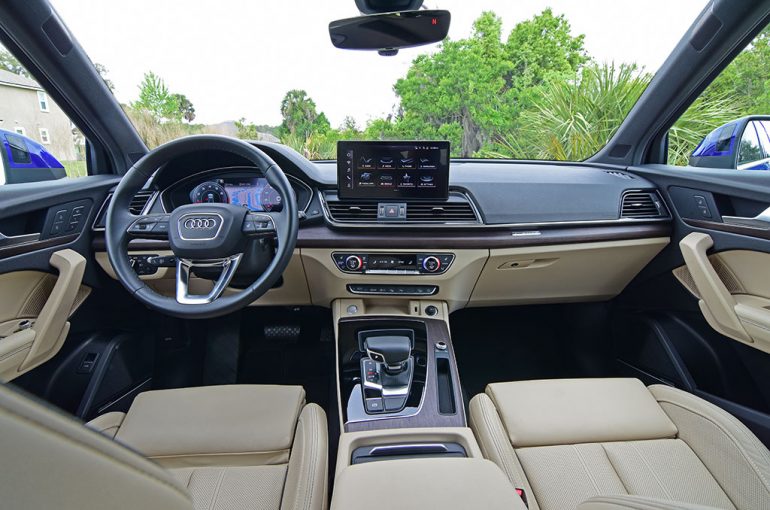 The digital gauge cluster, the familiar Audi virtual cockpit, is left unchanged with its display that’s been around for many years and praised by many for it having a multitude of display options and the welcomed Google Maps navigation display. 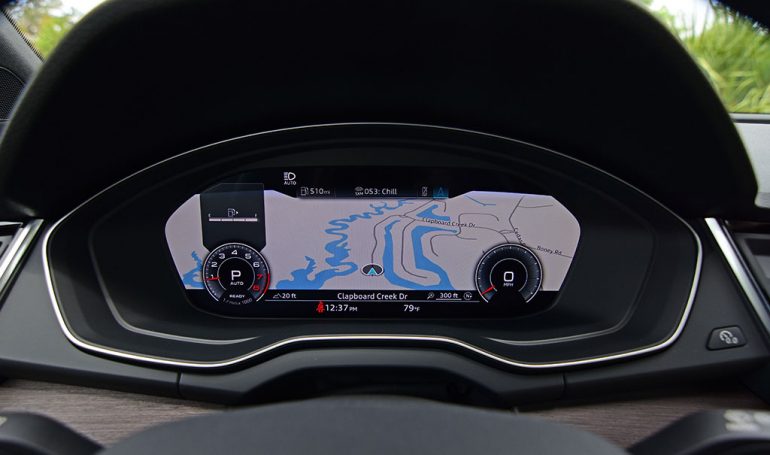 The seating arrangements have a surprising amount of space with the Q5 Sportback being a compact crossover and having some of its rear headroom and cargo space cut short from the impeding roofline. The front heated and ventilated seats have good lateral support and plentiful forward and aft adjustment. The heated rear outboard seats have just enough room for two adults and one child in the middle of the bench. 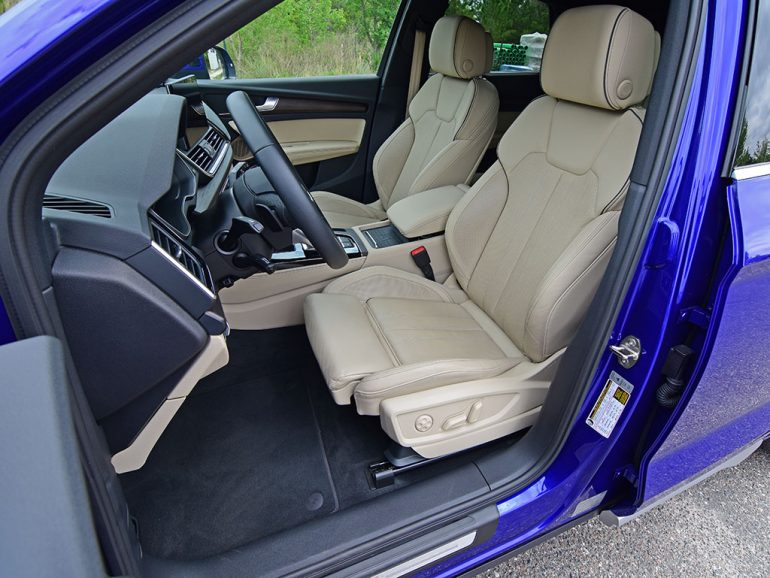 Cargo space is only cut short about one cubic foot from the normal Q5, having 24.7 cubic feet to work with behind the rear seats while the normal Q5 has 25.8 cubic feet. Folding the 60/40-split rear seatbacks down you have almost 52 cubic feet of cargo space. 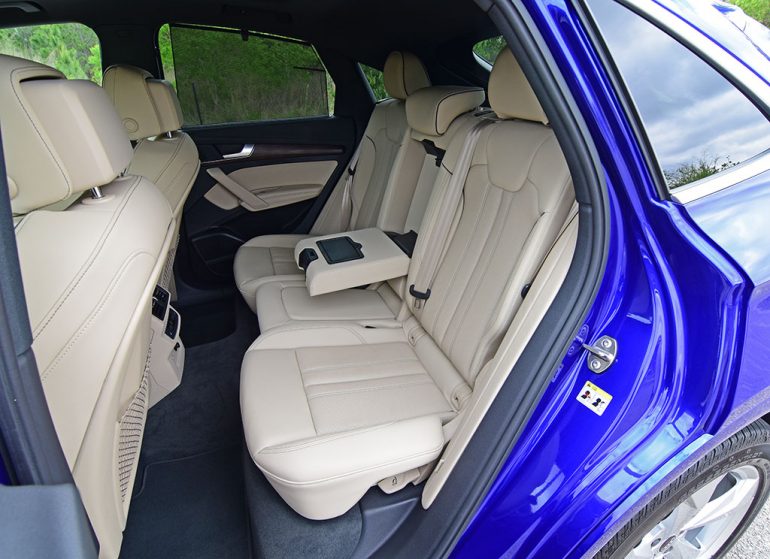 As you’d expect, there are the expected active safety features bundled up on the new Audi Q5 Sportback, and as part of the optional extensive Prestige Package equipped on my loaded test vehicle, you have the addition of Adaptive Cruise Control, a top view 360-degree camera system, park assist, and active lane assist. Apart from the options, you get blind-spot monitors, forward collision warning and avoidance assist, lane departure warning, and rear cross-traffic warning. 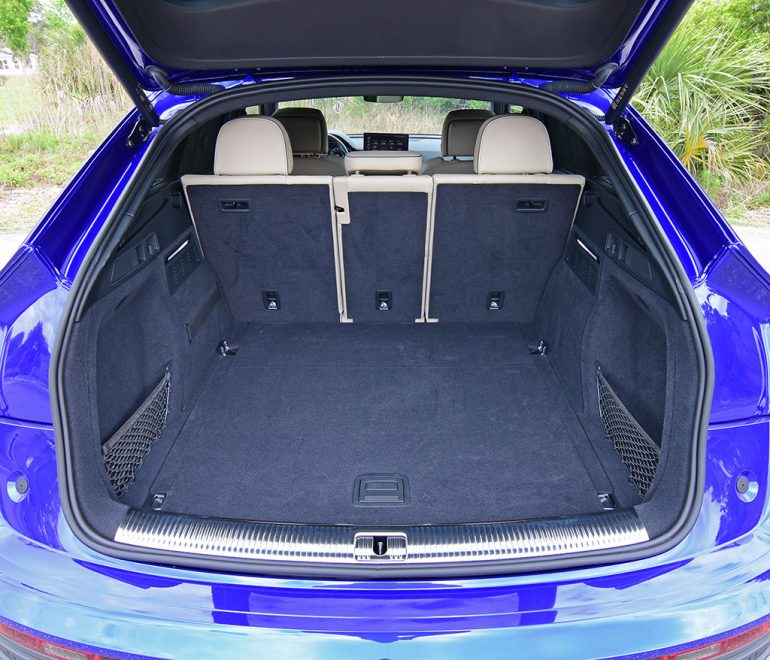 The surprising aspect that I find in the new Audi Q5 Sportback is that there is a good value in all that you get out of such a vehicle being a compact luxury crossover even at the starting price of $50,100. The pricing remains just under $60,000 for my loaded out Q5 Sportback Prestige Package test vehicle testing out at $59,340, which includes a $1,095 destination charge. The pricing and packaging of the Q5 Sportback make it an attractive offering in more ways than one in the compact crossover luxury segment.