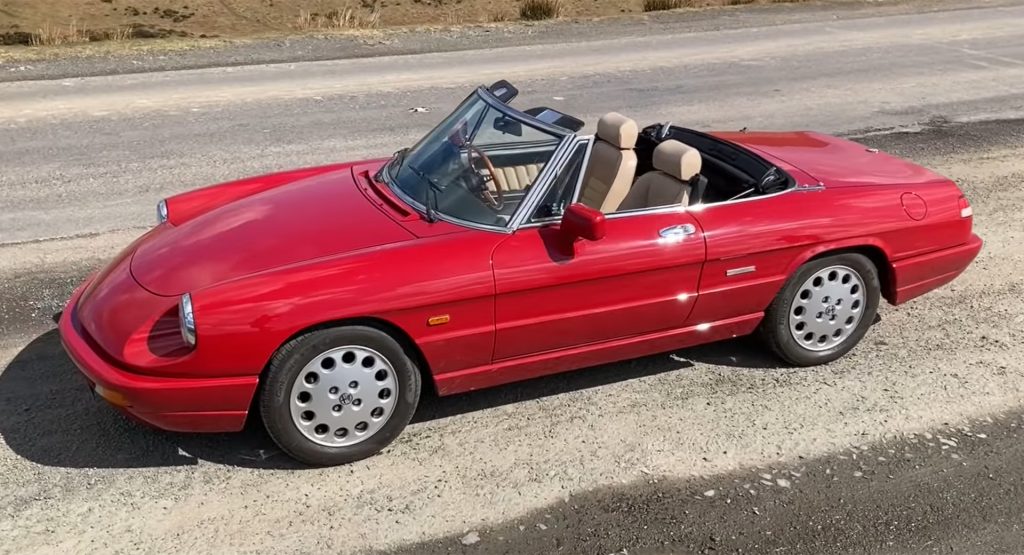 Electric conversions are becoming the new hot trend in the aftermarket, especially for older vehicles. The latest of these conversions comes from Electric Classic Cars, who not only converted a ’90s Alfa Romeo Spider to electric power, but restored it visually as well.

Powering the car is a NetGain HyPer 9 motor, which is connected to the original driveshaft rather than directly to the wheels. That being said, while it is connected by way of a gear reduction unit, there’s no transmission, so the car is still direct drive. The car was originally powered by a 2.0-liter four-cylinder gas engine making 124 hp (126 PS / 93 kW) and 122 lb-ft (166 Nm) of torque, and the electric conversion supposedly makes similar power with more torque.

See Also: This BMW Batmobile Has 450 Electric Horsepower Thanks To A Tesla Powertrain

As good as the powertrain is, though, an electric car is nothing without its batteries. That’s why this electric Alfa has a total of seven Tesla Model S batteries with a combined capacity of 35 kWh, enough to afford it a range of around 120 miles (193 km). And to maintain the car’s original weight distribution, the batteries are split up, with four up front and three at the back. Not only that, but the electrified car also maintains a curb weight that’s allegedly very close to original.

Aside from the conversion itself, the car was also fitted with some clever details to accommodate its new power source. This includes touches like the charging plug being in the original gas filler’s location, a “gear” selector to replace the original manual shifter, and new gauges, which now display amps instead of RPM, motor temperature instead of engine temperature, and state of charge instead of fuel level. Some all-new features added to the Alfa include a new head unit, electric heating, and an eco mode that softens acceleration and increases brake regen (yes, this car also has regenerative braking).

Read More: Tesla-Powered Porsche 944 Proves That Electric Restomods Don’t Have To Be Heavy

As for how it drives, it’s described as having fantastic handling, but also being very effortless and relaxing to operate. Its overall character was likened to a stock Mazda Miata in the sense that it’s very spirited, predictable, and compliant, but also pretty comfortable. For those same reasons, it’s not the sportiest driving experience out there, but that’s arguably not the point of this car.