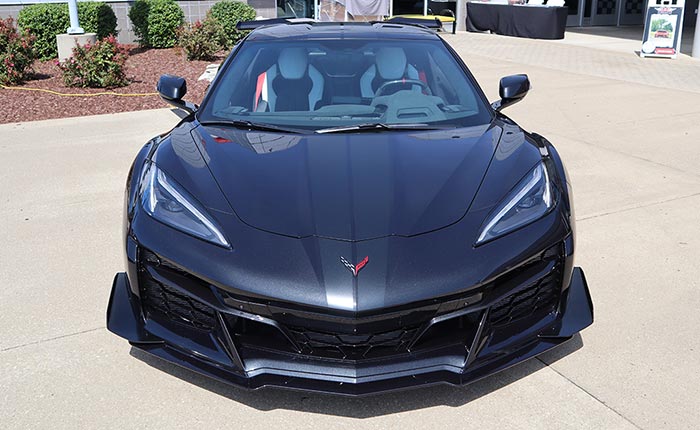 The November 2022 issue of Car and Driver just hit newsstands, and it features a review of the 2023 Corvette Z06 Convertible. There are a lot of positive adjectives and accolades directed to the new sports car, including their verdict that this is the Best.Corvette.Ever.

This Black 2023 Corvette Z06 Convertible was produced in the base configuration but wearing the same high-wing aero that comes on the Z07-equipped models. This press car has also been driven by Corvette Racing’s Antonio Garcia at Road America, and Emelia Hartford was seen showing off the car and posing it next to her twin turbo C8 nicknamed Phoenix.

The Z06 Convertible, dressed in its 70th Anniversary package livery with Carbon Flash Metallic exterior and the midnight ghost stripes, received an instrumented test during its review with Car and Driver, and you can read the full review that’s now up on their website.

Here’s a sample from the review:

It recalibrates your expectations, the Z06. At first, 8500 rpm seems nutty, but soon enough you find yourself hitting the 8600-rpm rev limiter because it’s pulling hard all the way there (the LT6 feels like it would be happy to visit the far side of 10,000 rpm, were it not for warranty considerations). There’s so much lateral stick that you’re almost surprised when it turns out to have limits, and the front and rear ends begin a dance to see who’ll relinquish grip first. It’s like the Z06 channels the high-winding spirit of the sixth-gen Z06, but with so much more sophistication. This is the Ferrari that Ferrari doesn’t make anymore.

The article does give us some “lows” for the car, namely the 12 MPG City fuel economy rating and that the Convertible top hides the engine, but these “complaints” come off more like a B-team YouTuber doing a “Five things I Hate About the Z06” video than a respected automotive magazine. For us, we are more interested in what’s good , so our advice is to concentrate on the positives found in these specifications: 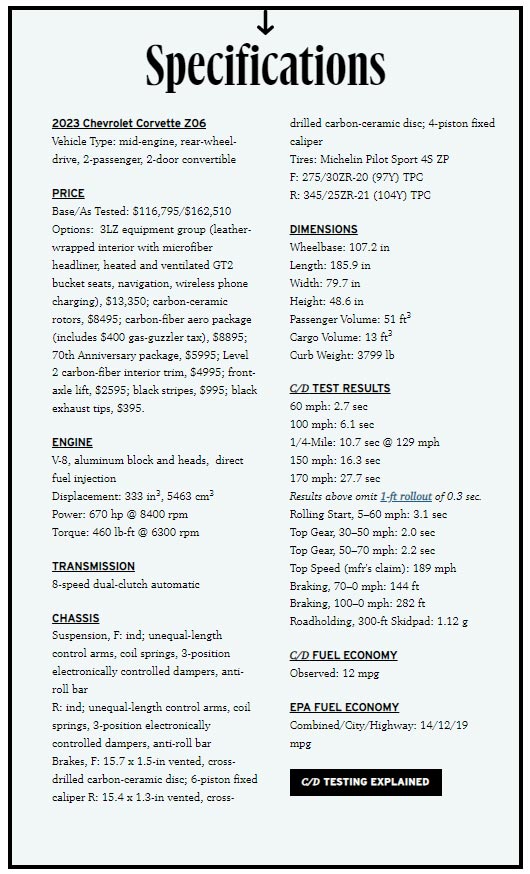 The article offers a quick, fun read and the picture of the Z06 doing a power slide with the top down is epic! Check it out for yourself at Car and Driver.

Lightning Lap 2022 is Here, Time to Guess Where the C8 Corvette Z06 Will Land Next Year